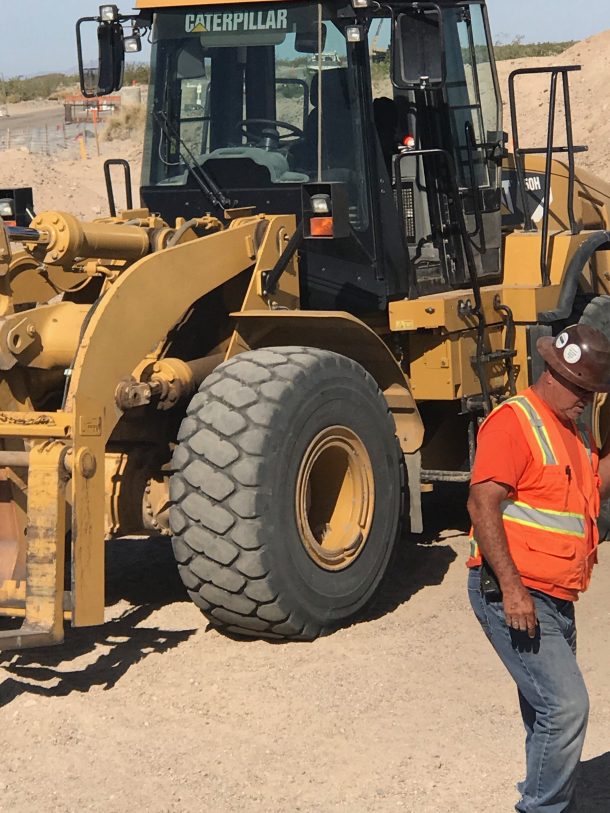 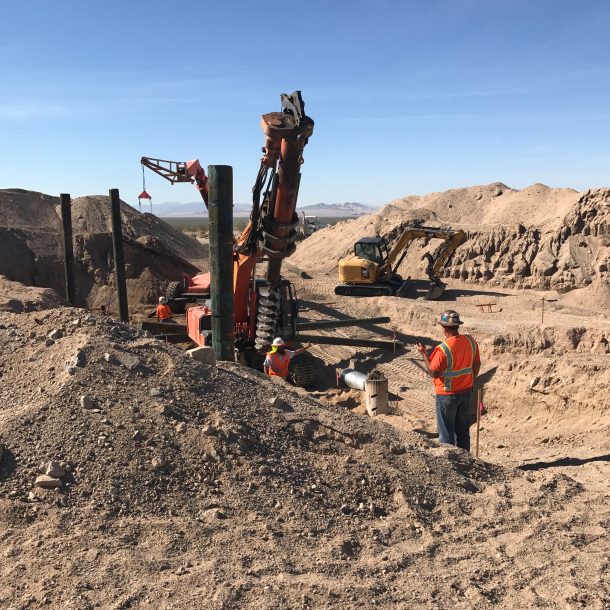 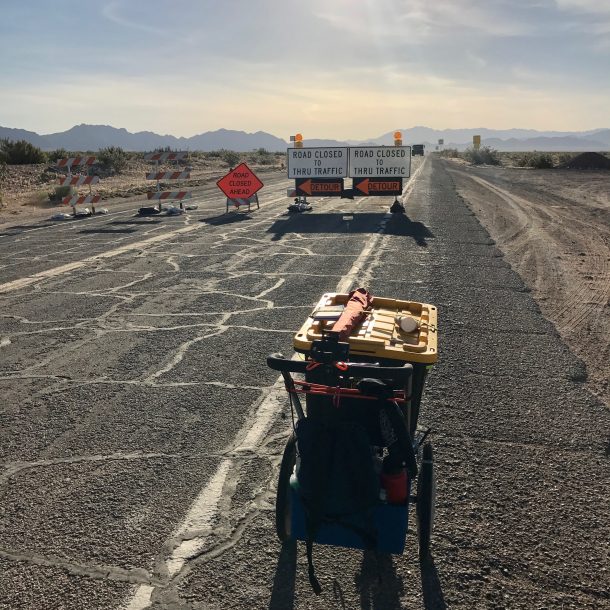 I hit the road at 5:10 am and ended five hours later when the heat inevitably defeated me.

The initial ascent up Amboy Road was not too bad, and there were few vehicles coming in my direction. At 7:20 am I reached the Route 66 detour and just kept walking on the old portion of the road. Some bridges are being repaired.

Driving a large truck, Scott was the first to stop and ask what and how I was doing. He works for a company that mines calcium and described himself as a “dirt mover.” He promised to come back with some water.

Then Dave, who is an excavation contractor, drove by in a Caterpillar tractor. He gave me a bottle of water and we talked about the heat. At the area of the first bridge construction I had to take the long way around on a dirt road. The road was getting tougher and the temperature hotter. I knew that both men had trailers in which they lived during the work week. Scott soon returned with a bag containing water, Gatorade, and Granola bars. Of course I was very grateful.

I was fading fast and knew I couldn’t go on for much longer. My plan was to find someplace to pitch my tent and just hole up until early in the morning. There were some trees and trailers up ahead. I asked Scott if there was any possibility of me pitching my tent near his trailer. Instead, he invited me go ahead and use his trailer. “The AC is on and the door’s open.” I staggered to the Jayco trailer he described, grabbed a few things from Walker, and entered a world of COOL. I took my shoes and shirt off and collapsed across the foot of his bed.

Scott returned a little while later. “You know, if you’re going to walk across the Mojave, you should do it at night.” He left to go back to work and I went back to sleep. At 2 pm I ate lunch (a pouch of Bumble Bee tuna [16 g protein], crackers, tangerines, and water). I felt a helluva lot better, and started strategizing my next move. I’d loved to have stayed in the trailer overnight, but there is absolutely no room for me.

The problem with getting up early and walking until late morning is that you’re quitting at the hottest time of the day. The idea of resuming later in the day (like I did yesterday), is that even at 5 or 6 o’clock it’s still really hot out.