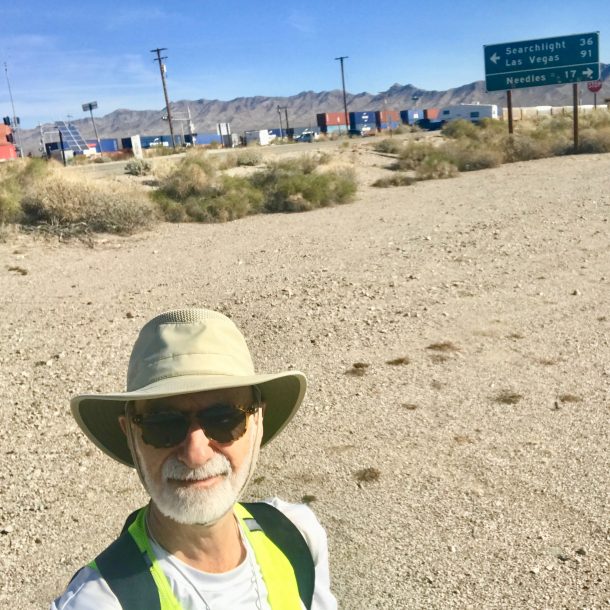 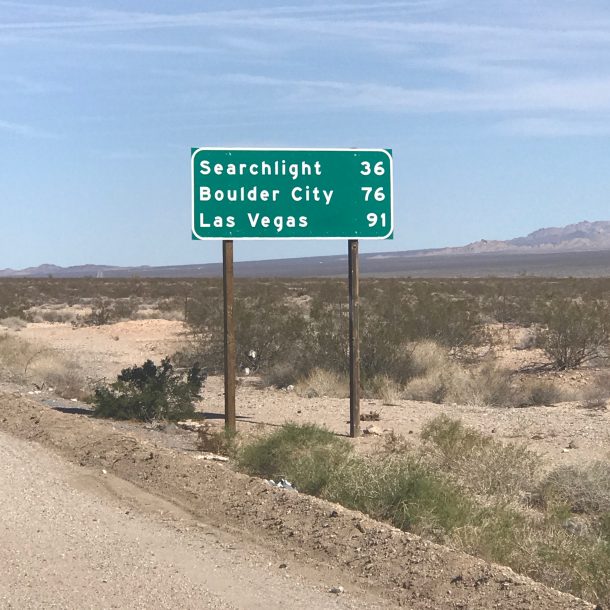 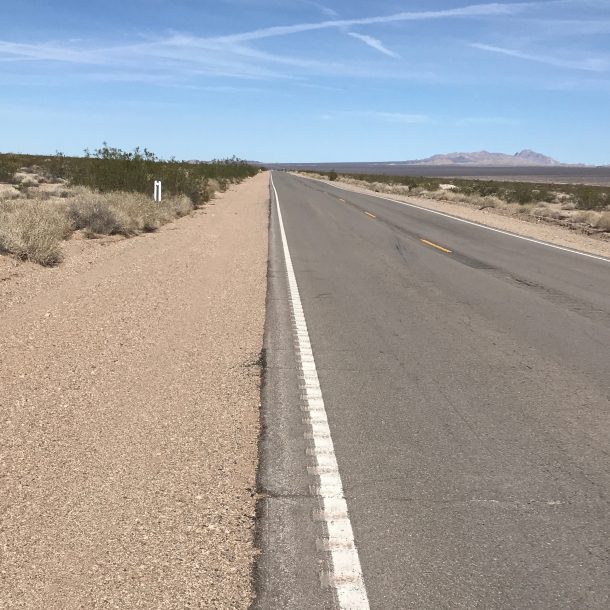 It was a military-ish day. I walked into a light headwind (call it a strong breeze if you wish) all day long. This wasn’t necessarily a bad thing—the temperature was pleasant enough. I continued on Route 66 for a while when a freight train loaded with tanks and jeeps passed by, a reminder of an element of society that is typically hidden from my consciousness, other than in films and TV.

Soon I turned onto Route 95, thus ending a pleasant albeit lonely walk on Route 66, a road that continues to disappoint me.

Route 95 was pretty much miserable to walk on. Constant trucks and cars headed my way, and the only shoulder to speak of was made of sand and gravel. Frankly, it was hell to walk on. I needed to step on and off the highway, using extra vigilance and energy.

I passed a few interesting sites along the way. One was Camp Ibis: “In March 1942 the War Department tasked General George S. Patton Jr. with finding a desert training site that matched the conditions of North Africa… Patton identified a vast area that reached into SE California and SW Arizona as the ideal location…”

The other was the Dead Mountains Wilderness Area, where I stopped to eat my lunch and was joined by a large number of ants (they always seem to find me).

My goal was to walk north and then take Rte. 163 to Laughlin (our new HQ for the next 3 nights). But 163 is obviously NOT made for walking—the Arizona Highway Patrol wouldn’t approve of me walking on this very “Interstate-like” highway. I’ll decide on an alternate route after examining the maps.

After setting today’s pace with some “military” marches, I listened to the Beatles “Rubber Soul” (1965) and then totally enjoyed Brubeck’s “Time Further Out” (1961).

By the time Adam picked me up after 15 or 16 miles, my feet (and the rest of me) were exhausted.