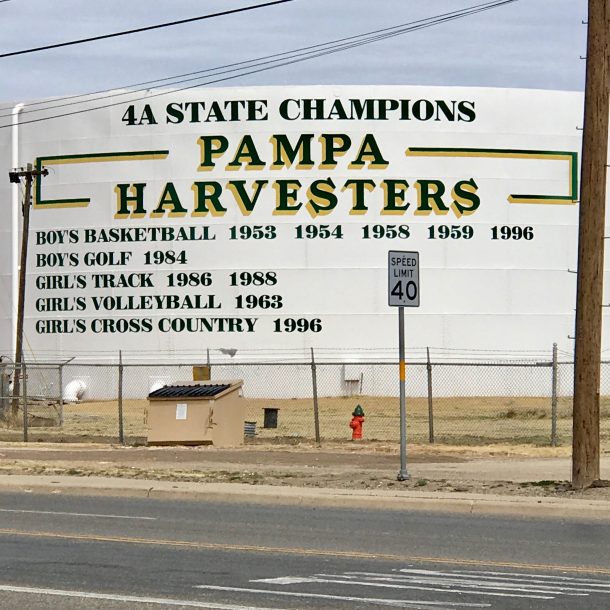 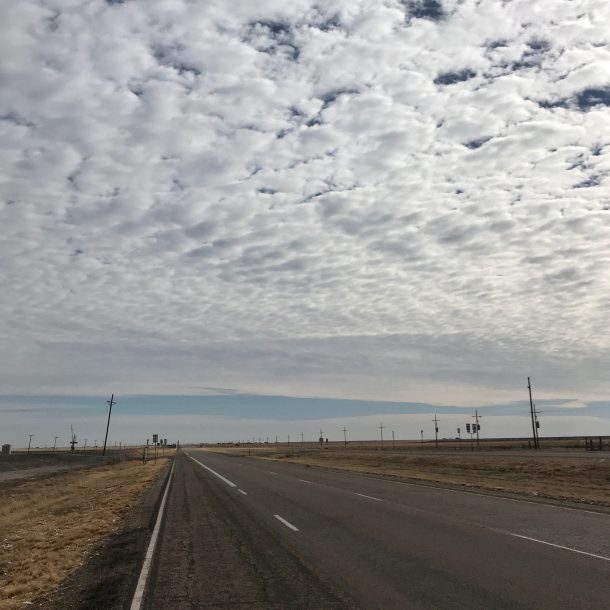 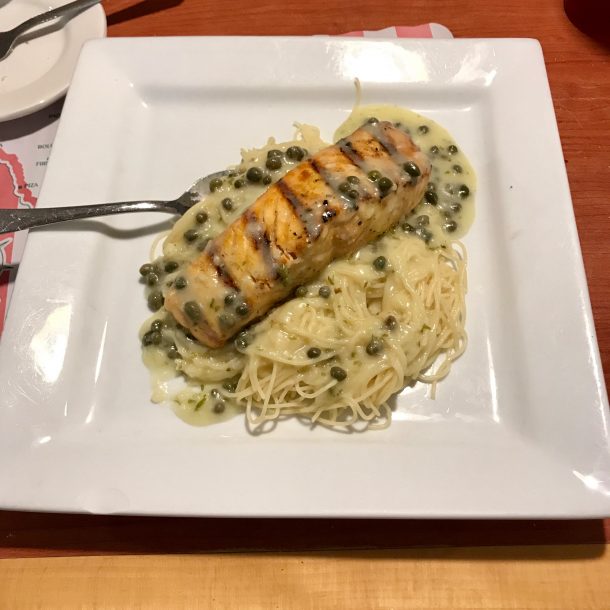 The morning was chilly and overcast, but the wind was not a big factor. I was on the road at 8:30 am, looking forward to a night in a motel in Pampa after two nights in the tent.

First stop was Allsup’s in White Deer, a couple of miles down the highway. I chatted with Jackie about my walk while Sherry made me two egg and cheese breakfast sandwiches on croissants. In the display case there were a dozen or two breakfast sandwiches already made, but they all had some kind of meat on them. So I was happy to have mine freshly made. They’re just as good as McDonald’s Egg McMuffins (hold the Canadian bacon, please), and a third the price.

About six miles from Pampa, the shoulder narrowed to nothing, so I moved over to the other side of the road, walking with traffic, which I normally don’t do. But it felt much safer, and since everyone keeps telling me to “Be safe,” I heeded their advice.

Although I was on Hwy 60, most of the motels in Pampa are on Hwy 70, so I needed to walk about a mile off my route. This leads to the question as to whether I should continue North on Hwy 70 or East on Hwy 60. I’ll ponder this tonight after dinner.

Artist of the Day is Scott Hamilton—not the skater but rather the tenor saxophonist. I’ve been a fan of Scott’s for decades, and probably have more of his CDs than any other jazz musician. Although he’s not a household name, when I was once asked by my sax teacher at Cal State University who my favorite sax player was, I named Hamilton. The teacher was surprised. “Really?” I remember my response: “Sure. His tone is beautiful. He plays in tune. He can play fast and hit all the changes, or slow, with a beautiful, lyrical ballad style. And he plays all of my favorite songs.”

I’ve listened to all the sax greats, and have many of their albums and CDs. But the sounds I like to hear come from musicians that play to my sensibilities, such as Scott Hamilton, Paul Desmond, and Stan Getz (notwithstanding his personal attributes).

I think I’ve reached the point in my life that I don’t have to apologize for my tastes in music.

Like this post2
Dr. Robert Schoen is a writer, musician, and composer. His book, On God’s Radar, follows his 2017-18 walk from coast-to-coast across the United States. He is also the author of What I Wish My Christian Friends Knew About Judaism  and the co-author (with Catherine deCuir) of the novel The Rabbi Finds Her Way.