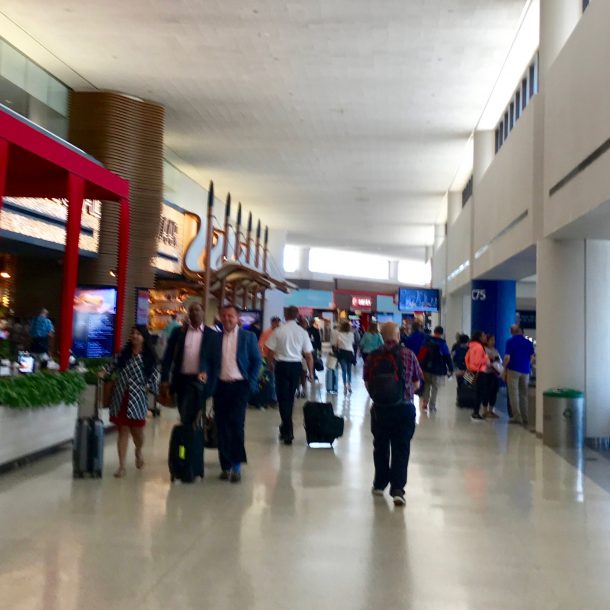 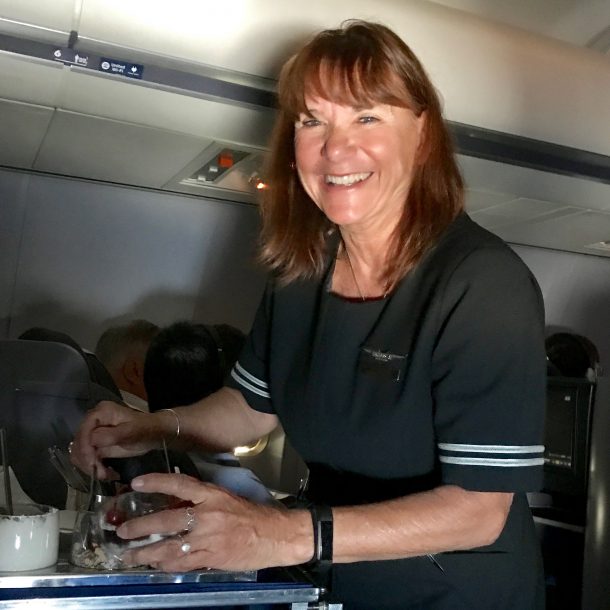 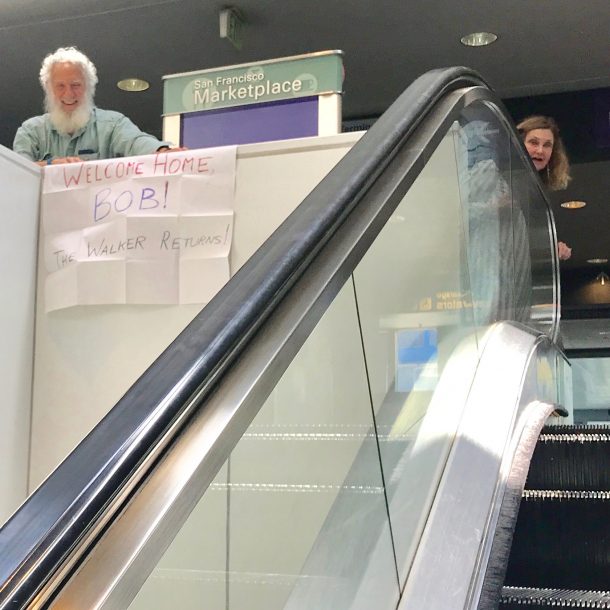 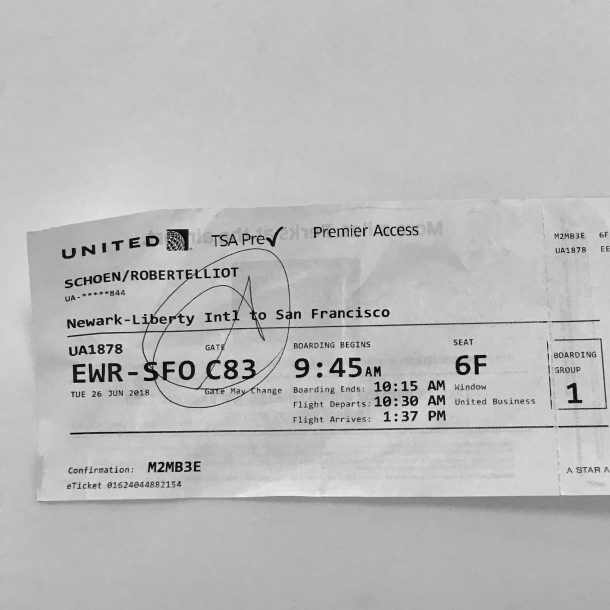 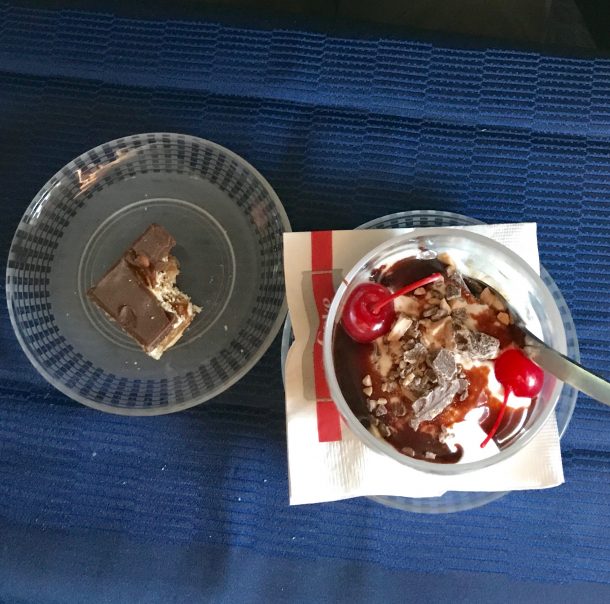 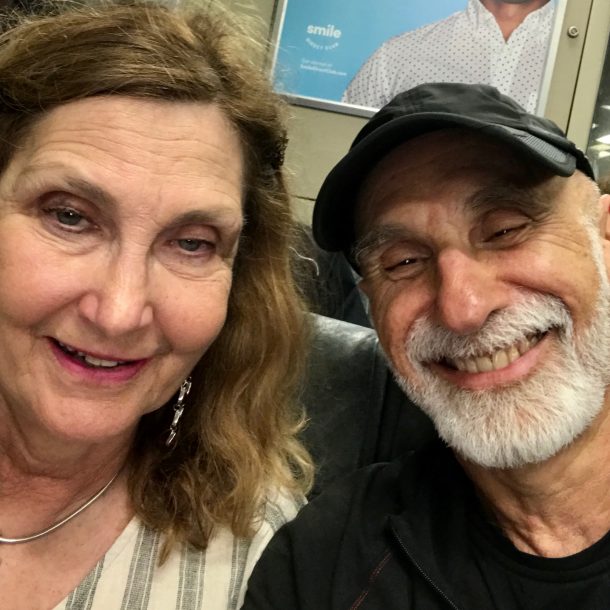 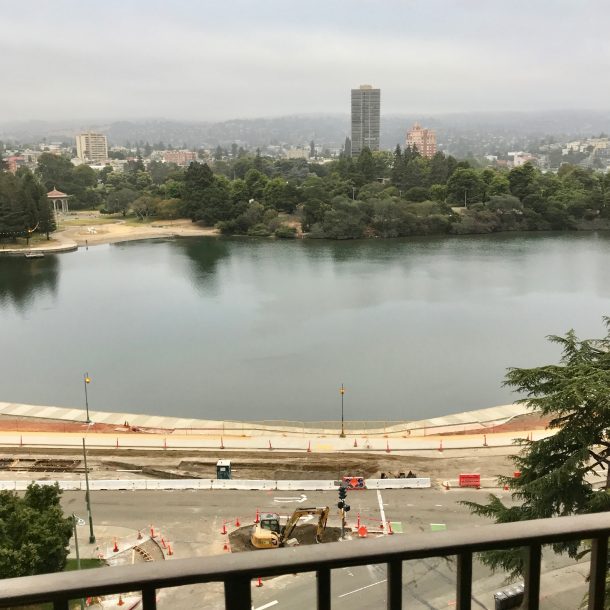 Roger and I ate an early breakfast and we were out of the house at 7 am. He and his family own real estate developments and properties in New Jersey, and we visited them on the way to Newark airport, all the while trading stories.

There’s something special about the relationship one has with someone you’ve known for over 50 years. I’m very proud of Roger and the success he’s had, rising from a humble background to become a CPA, an entrepreneur/businessman, and a caring, generous family man.

After the usual ordeal going through airport security, my group (#1) boarded the plane. (I’d used 60,000 United miles to upgrade to Business/First Class.) I wasted no time telling the flight attendant about my journey and my Dad, asking if she’d give my card to the captain. Instead, she invited me to follow her to the cockpit and introduced me.

The pilot and copilot were appreciative of my father’s service during the war and interested in my walk. I was prepared for this unique photo opp.

I spoke with my seat mate, Jeff, for a long time. He’s a physician and researcher at an international pharmaceutical firm, and he asked many questions about my journey.

It’s already apparent that both the best and worst experiences as well as the highs and lows of my journey are quickly evolving into significant anecdotal stories. Thus, the wondrous sight of fireflies against a starlit sky and my unfortunate encounter with bedbugs seem to have become equally weighted in the retelling. (There’s probably a literary term for this phenomenon.)

Imagine my surprise when, after landing, I started up the escalator to the AirTrain and spied Sharon, Dan, Hannah, and Stan waiting for me. I turned around and there was Burt! I could not have been more touched and pleased! We all (except Burt, who drove) took BART back to the East Bay.

Once home, it took me about a minute to unpack. I spent some time with Graciela, and later Sharon and I called Verizon to reduce our data plan. I have a giant pile of mail to look through, I need to unpack the black and yellow container I shipped from Cincinnati, and my car battery is dead.

It’s great to be home!