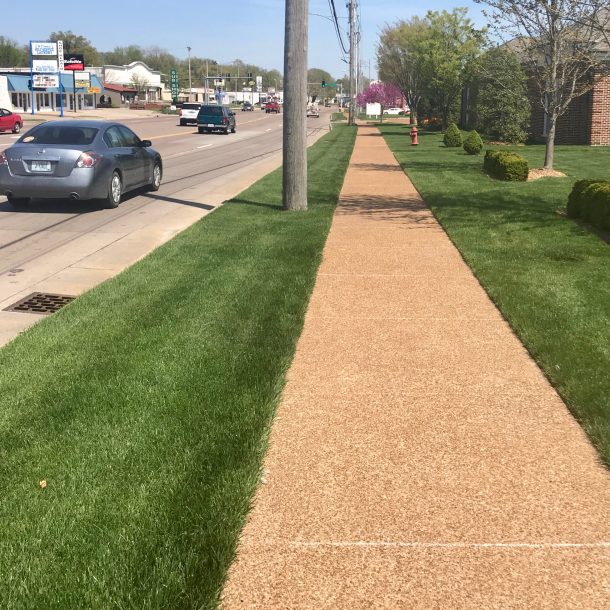 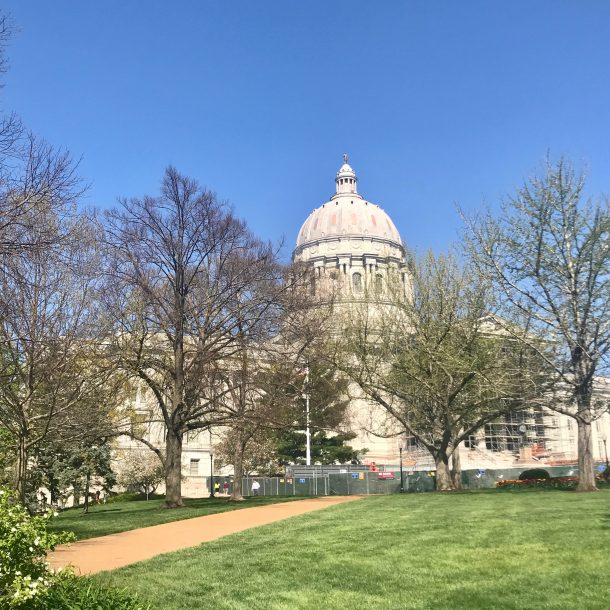 I dreaded dealing with the treacherous stretch of Hwy 50 I‘d be facing this morning, with its broken, narrow pavement and heavy traffic. So when I checked in yesterday I asked the man at the front desk of the Twin Pine Motel if he (or someone) could give me a ride past the stretch. He agreed to do so.

Rocky, whose family owns the motel, was ready to go at 8:30 am. He drives a Toyota Corolla, so I detached the container from my kart and we put everything in his car. After a 15 minute drive, the highway was back to normal, so I got out, put the kart back together again, and headed east. The weather has turned warmer and I’m dressed accordingly. At least April is going out like a lamb.

While walking I listened to (and sometimes watched) a long interview with Steve Martin hosted by the New Yorker. It featured several video clips, including the famous Flydini routine that he performed on the Tonight show the last week Johnny Carson hosted. It’s truly amazing and funny.

Bruce, a Missouri Highway Patrol officer, stopped to chat. He wished me luck on my walk, and thanked me for my father’s service in WW2.

After walking 14.3 miles, I arrived in Jefferson City, the capitol of Missouri. I had to get off Hwy 50 (which was getting scary) and walk along Missouri Street and some other neighborhood streets for a while until I reached Baymont Inn & Suites. The motel’s on the moderate end—quiet, clean, and nicely furnished. I even have a view of the capitol building’s dome.

On my way to pick up lunch, I walked by the capitol building, whose columns are currently surrounded by scaffolding.

I finally got a chance to look at the Katy Trail map. Because it wanders too far off my desired route, I’m not walking the entire trail. But I do plan to walk approximately 100 miles, from Jefferson City to St. Charles.

Excuse me while I get a haircut, beard trim, shower, and shave.