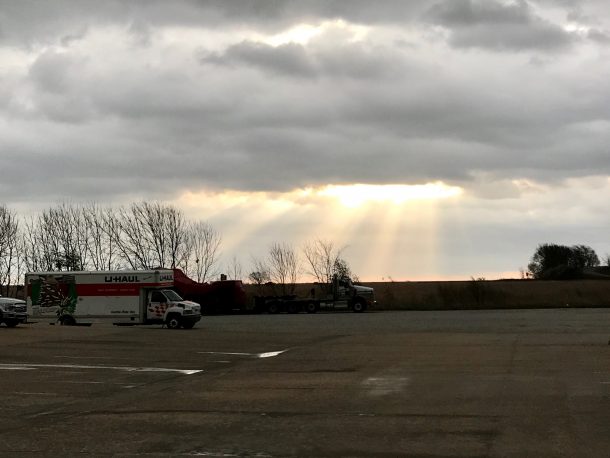 Forced rest has its place, I suppose.

I ate breakfast (yogurt, Raisin Bran, oats, banana, extra raisins, orange juice, and vitamins), and then emptied my kart and rearranged everything. I refolded all of my clothes.

The camp stool I’d ordered to replace the one I’d accidentally left in Nowata arrived via UPS from Amazon (1-day shipping). I walked across the highway again and got a 6” tuna sub to go; because tuna is the Friday sub-of-the-day (for some traditional Catholic reason), it was discounted. Dr Pepper. Lays Classic potato chips.

I spent a couple of hours on Google Maps deciding where to head next. After examining the roads-to-come, the decision is north. This is based on the shoulders of highways and nothing else.

There’s been a tornado watch in effect for a number of Oklahoma counties, and Craig County (which includes Big Cabin) is one of those counties. The predicted thunderstorms have not yet happened, although there was a brief shower this morning. AccuWeather indicates that winds have been over 20 mph all day, with temperatures in the 70°s; but I can’t confirm any of this. It’s not cold out, but 70°? No way. Somewhere in Oklahoma there’s thunder and lightning (and frogs and locusts), but not here.

There’s a brick building across the parking lot, and I was wondering what it was. When I walked outside to take a photo of the three stacked trucks in the parking lot, I saw that the building houses the pool and spa. So I think I’ll go soak in the Jacuzzi for a while. Then, when I’m walking back to my room, maybe a thunderstorm will start.

(Later) The spa was just fine.

No storm (thunder or otherwise). However, the evening sky was a particular shade of yellow that I cannot recall ever having seen before.