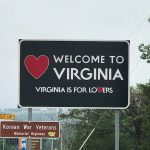 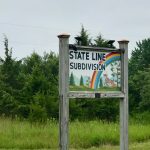 I got on the road after packing up my wet gear as best I could. Beautiful scenery may be awesome, but wet camping gear is not.

During a downpour at the end of the day, the deputy sheriff pulled up and made me an offer I couldn’t refuse. She asked where I was headed, and I told her I had a reservation at the Marriott, a couple of miles away. She said, “Hop in!” And I did.

We chatted through the clear protective barrier for a few minutes until she pulled up under the porte-cochere. Then, because the back doors of police cars can’t be opened from inside, she had to come around to let me out. This was limo service at its strangest!

I thanked her, hobbled into the lobby, checked in, dumped my gear in my fifth floor room overlooking an excavation/construction site, and headed to a very hot Jacuzzi. A just reward!

For over 2,000 miles I pushed my stuff in a kart. Now, for 400 more miles I’ve carried it on my back. The next 120 miles or so—from my current location in Winchester to the Chesapeake Bay Bridge—is pretty much city or suburbia, with facilities and services all along the way. Over the bridge lies the Eastern Shore. That final 80 miles, between the bridge and the ocean, is not as densely occupied, but it is well-traveled and serviced.

With this in mind, I’ve decided that my nights sleeping on the side of the road, under picnic shelters, and in backyards is over. It is now time to ship my camping gear home. It’s served me well, but adios.

I’m looking forward to dinner tonight with Jeff Rudisill. Jeff walked coast-to-coast several years ago. He’s much tougher than I and never complains. I want to be like him when I grow up.

Like this post2
Dr. Robert Schoen is a writer, musician, and composer. His book, On God’s Radar, follows his 2017-18 walk from coast-to-coast across the United States. He is also the co-author (with Catherine deCuir) of the novel The Rabbi Finds Her Way.